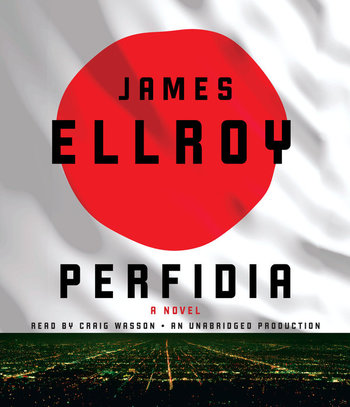 Perfidia is the first book of James Ellroy's second LA Quartet. Which, yes, is a little confusing - the original Quartet, mostly written in the 80's, takes place in Los Angeles from the late 40's to 1960 (or so), and comprises The Black Dahlia, The Big Nowhere, L.A. Confidential and White Jazz.

Ellroy's second LA Quartet, beginning with Perfidia, rewinds the clock to the early 1940's. Specifically, in the case of Perfidia, to December 1941, beginning in the days before the Japanese attack on Pearl Harbor and ending right before New Year's.

As per Ellroy's Signature Style, the book focuses on four point of view characters:

Last (but certainly not least) is LAPD detective Dudley Smith, the Big Bad of the original LA Quartet, brought front and center for the first time as a POV character. Cunning, dapper, charming and unhesitating about killing anyone who gets in his way or offends his unique moral worldview, Smith is on a constant search for money-making angles - even when it comes to the impending internment of local Japanese-American citizens.

When the LAPD stumbles across the scene of what appears to be the ritual murder of a middle-class Japanese family, Smith, Ashida, Lake and Parker become enmeshed in a complicated drama involving Fifth Columnists, Communists, Fascists, eugenicists and some corrupt businessmen who will be very familiar to readers of Ellroy's original Quartet.

Followed by This Storm.

This Novel Contains Examples of: