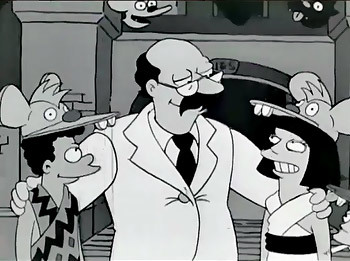 "Roger Myers Sr., the beloved genius behind Itchy & Scratchy, loved and cared about almost all the peoples of the world."
"From all of us at Stark Industries, I would like to personally introduce you to the city of the future!"
— Howard Stark, Iron Man 2
Advertisement:

A No Celebrities Were Harmed version of Walt Disney; expect him to be the animator of a world-famous cartoon character (frequently a Mocky Mouse) and/or the founder of Souvenir Land. Also expect an exaggerated interest in planned communities and/or creating a utopia, possibly with sinister undertones. He'll present said utopia in the form of a World's Fair

-like exhibition, usually in his parks. Oh, and, expect Human Popsicle or Brain in a Jar jokes, many of them.

Many of these characters go beyond parodying just Disney and fuse him with Howard Hughes, another mustachio'd early/Golden Age of Hollywood impresario and futurist. Hughes gradually became debilitated by severe mental illness (OCD and agoraphobia) and eventually was reduced to living in seclusion, obsessively carrying out odd habits such as urinating in jars, wearing tissue boxes on his feet, and refusing to cut his nails. While Disney endured a fairly normal, if still ultimately fatal, bout with cancer, Hughes' eccentricities dovetail well enough with the prevailing Urban Legend about Disney going into hiding in order to cheat death that perhaps it's not surprising that many writers can't resist the conflation when writing this type of character.

Andrew Ryan from BioShock is basically a Libertarian Walt Disney bent on building a utopia. He also has a mustache that is similar to Disney's. Like Robert House he is also based on Howard Hughes.

Andrew Ryan from BioShock is basically a Libertarian Walt Disney bent on building a utopia. He also has a mustache that is similar to Disney's. Like Robert House he is also based on Howard Hughes.