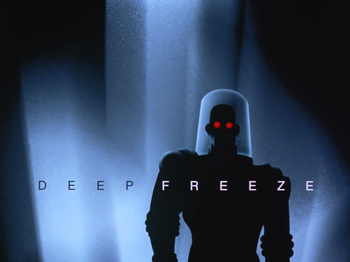 Mr. Freeze is kidnapped from Arkham by Grant Walker, an aging billionaire who desires to become immortal by going through the same process that Victor underwent (as it slowed his metabolism and cryonically preserved his cells). He convinces Freeze to help him in exchange for curing Freeze's not-actually-dead wife, Nora. It becomes apparent when Batman and Robin arrive in Walker's private city off Gotham's coast, Oceana, that he has more than just his own immortality in mind. Namely that he plans to freeze the entire world so that his chosen few can live on in his personal utopia.