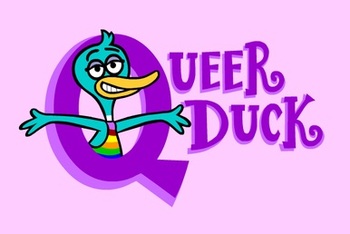 The only woman to lay him was his mother!

Queer Duck is an animated web series created by Mike Reiss, one of the "golden age" writers for The Simpsons and co-creator of The Critic. It was produced by Icebox Entertainment, originally airing on their website before getting picked up by Showtime. Xeth Feinberg directed each episode. The series was a follow up to the duo's previous web show, Hard Drinkin' Lincoln.

The title character, Adam Seymour Duckstein (voiced by Jim J. Bullock), is an out-loud-and-proud water fowl working as a male nurse who regularly deals with the mishaps that come with living as an openly gay man. Along for the ride are his close-knit circle of gay friends Bi-Polar Bear (Billy West), Oscar Wildcat (Maurice LaMarche) and his boyfriend Openly Gator (Kevin Michael Richardson). As this is an internet-based show about homosexuality created in the early 2000s by a hetereosexual man, expect some of it's content to be a tad... on the regressive side. 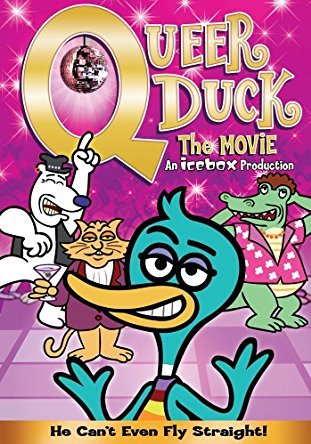 A Direct to Video Animated Musical feature, simply titled Queer Duck: The Movie, was released in 2006.

Queer Duck finds himself in an existential crisis, questioning his homosexuality and thinking how much easier his life would be if everyone in the world didn't hate him because of who he was in love with. After breaking up with Openly Gator, he becomes acquainted with washed-up Broadway diva Lola Buzzard (Jackie Hoffman), helping her make a comeback with her one-woman show I'm Not Dead Yet and eventually getting engaged to her. Thinking this may be his one shot at a happy life, Queer Duck seeks the help of local gay conversion therapist Rev. Vandergelding (Jeff Bennett), who turns him into a "bro"-type slob. Will Queer Duck even again be the homosexual everyone knows and loves?