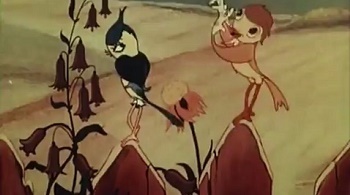 Armer Hansi (Poor Hansi) is a 18 minutes-long German animated short directed by Gerhard Fieber. It was released in 1943.

Hansi is a songbird who seeks to escape his cage and meet with an attractive female of a different species he has a crush on. He manages to escape the cage and finds himself confronted to the outside world.

This short is notable for being one of Nazi Germany's attempts at producing animation of significant quality to try to rival that of Walt Disney's studios. Adolf Hitler was so impressed by the groundbreaking animation of Snow White and the Seven Dwarfs that he ordered Joseph Goebbels to create a studio that would be able to reduce the technical gap between German and American productions. Thus the Deutsche Zeichenfilm studio was born in 1941. It was shut down in late 1944 due to the needs of the war effort.