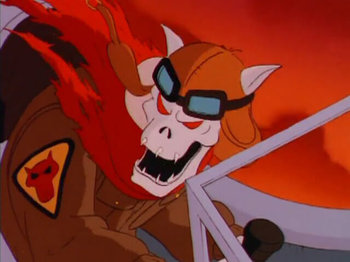 The Undead Legend.
Ten, twenty, thirty, forty, fifty, and more
The bloody Red Baron, was running up a score
Eighty men died trying to end the spree
Of the bloody Red Baron of Germany.
— "Snoopy vs. The Red Baron", The Royal Guardsmen
Advertisement:

Manfred von Richthofen, the man known as the "Red Baron", was a fighter pilot with the German Air Force during World War I. He is considered the ace-of-aces of the war, being officially credited with 80 air combat victories. He gained this cool nickname thanks to his Albatros D.III biplane and later Fokker Dr.I triplane, which were the only ones painted red, as well as having the "Baron" honorific.

His fame overpassed the war itself and ultimately, also the time, with various characters in fiction being modeled after the famous pilot, as well his Fokker triplane and Albatros biplane. This trope is for those fictional characters based on von Richthofen and/or any of their Cool Planes, as well their expies in fiction.

Sub-Trope of No Historical Figures Were Harmed and Stock Parodies. Compare Char Clone, an archetype indirectly inspired by Richthofen, who usually wears a Cool Mask and pilots a red Humongous Mecha. See also Borrowin' Samedi for another feared Baron.

Although Richthofen is the Trope Namer, this should not be confused with Red Baron, which means an awesome nickname which a character is known for. This is for appearances of the real Baron von Richthofen, or else parodies, expies, or homages to this historical character. Also shouldn't be confused with Super Robot Red Baron nor its Animated Adaptation which are In Name Only.

Baron, your sad mission turned off your glory.