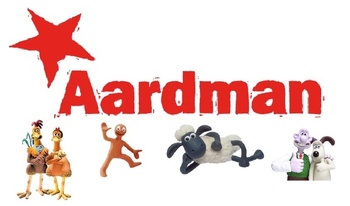 Left to right: Rocky and Ginger from Chicken Run, Morph, Shaun the Sheep and Wallace & Gromit.
Aardman Animations is a prolific Academy Award winning British animation and multimedia studio founded by David Sproxton and Peter Lord in 1975, primarily known for their distinct brand of Stop Motion Animation and British sense of humor.

It began, as most successes have, in a garage. The studio's name comes from the title of Sproxton and Lord's first traditionally-animated short, "The Aardman," about a superhero who evoked stereotypical western English machoism, i.e. an "'ard man".note For Americans, a "hard man" is British English for a macho bloke type. When it came time to deposit their cheque for the film, they realized they needed to create a new bank account for it, which became the Aardman Animation account. Several other films commissioned by The BBC, as well as hugely popular TV ads, would follow throughout the decades.

In the '80s, they began by producing The Amazing Adventures of Morph, a claymation series of children's shorts. Around this time, they hired a fresh-faced film school student named Nick Park to work for them on Peter Gabriel's famed "Sledgehammer" video while he finished his thesis film, A Grand Day Out. Park not only earned the studio its first Oscar with Creature Comforts (which was nominated against A Grand Day Out), but the characters from his thesis would become the first of the studio's Flagship Franchise, Wallace & Gromit, for which they would later produce three more shorts and a feature film, earning several more Oscars in the process.

Aardman would break into feature films at the dawn of the 21st century and have worked with a rotating cast of American distributors. Their first and most successful three were made in collaboration with DreamWorks Animation (five films had been planned, but the studios split due to some ugly behind-the-scenes politics), followed by two films with Sony Pictures Animation, a split due to diminishing returns, then two with Lionsgate followed by another spit due to diminishing returns. As of this writing, their latest partner is Netflix, with an exclusive new series of Shaun the Sheep specials being produced as part of the deal.

They have also done the English dubs for the Belgian-produced A Town Called Panic.

Works include the following: