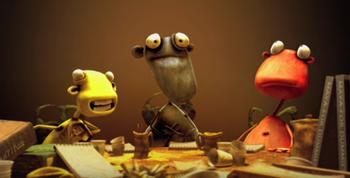 The Presentators was a short-lived series of animated shorts created by Aardman, commissioned by Nickelodeon UK and aired as commercial bumpers between 2002 and 2004. The shorts deal with the three eponymous Presentators, Brian, Stefan and Dan, as they attempt to host a show of some description without screwing it up.

The trio first appeared as animators in the award-winning 2001 short, The Deadline, in which they apologised for missing the deadline for their new film.

Not much else can be said; these shorts are really short (as in, it'd take less than half an hour to watch the entire series, including the original short on which they are based), and information on them is somewhat scarce. The series doesn't even have its own page on The Other Wiki. However, from 2009 to 2010, the series, in its (presumed) entirety was posted to Aardman Animations' YouTube channel, along with The Deadline, and can be viewed here.

The Presentators contains examples of: