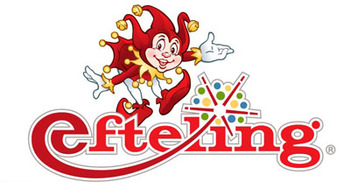 Efteling (De Efteling) is the biggest and most popular theme park resort in The Netherlands, located in Kaatsheuvel (province of North Brabant).

It opened in 1952, and has evolved from a nature park with a playground and a fairy forest into a full-sized amusement park. Its main themes encompass fantasy and romanticism based on legends, fairy tales, folklore and myths, and its most recognizable designs are the trademark of Anton Pieck

. The park's mascot is Pardoes, a jester and magician, and its signature rides include "Python", "Baron 1898", "De Vliegende Hollander", "Symbolica", "Joris en de Draak" and "Pagode".

It had over 5 million guests in 2017, which makes it the third most popular theme park resort in Europe behind Disneyland Paris and Europa-Park.

See also the character sheet for the park's own storytellings.

, and the park itself

Efteling has it's own Youtube series called "De Magische Klok"

which is a retrospective of the park and it's previous attractions. They also created a documentary on Anton Pieck

, the main designer and illustrator for the park's "Fairytale Forest" section.

Rides that have their own pages:

The park provides examples of the following tropes: