Ride / It's a Small World 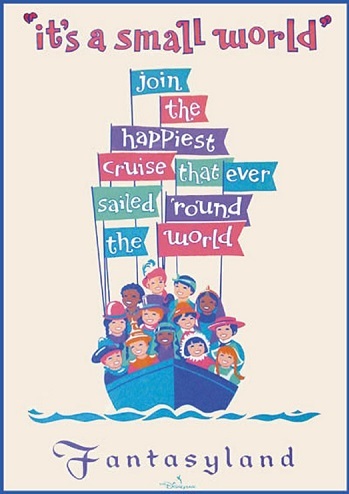 You can hear it already, can't you?
"When we completed It's a Small World for presentation at the New York World's Fair, we felt that we had accomplished what we'd set out to do. We wanted to foster a better understanding among nations of the world by showing the dress, the customs, the language, the music and a little of the culture of our neighbors around the world, and we wanted to show it to be a very happy one. I think it's safe to say that having fun has universal appeal."
— Walt Disney
Advertisement:

It's a Small World (stylized as "it's a small world") is a water-based dark ride at the Disney Theme Parks, themed as a boat trip through the various nations of the world, filled with all the earth's children celebrating together in international unity and global peace, by continuously singing a cheerful song.

The ride's history began in the early 1960s, when it was among the many Disney attractions designed for the 1964 New York World's Fair, along with Great Moments with Mr. Lincoln, Carousel of Progress, and Magic Skyway. The attraction was originally to be called "Children of the World", and the initial idea is that it would feature the national anthems of the different countries of the world all playing at once, but upon testing it, Walt felt that it wasn't working. Desiring a single song that could be easily translated and played repeatedly, he asked the Sherman Brothers to come up with the best they've got, and thus the song was born. Mary Blair, an art director who had previously collaborated with Disney on several of their films, also proved instrumental to the ride's development, overseeing its set design and color style.

Upon opening, the ride was an overwhelming success with the public, resulting in it eventually being brought over to Disneyland in 1966, and over the next few decades it also found its way over to Magic Kingdom, Tokyo Disneyland, Disneyland Paris, and Hong Kong Disneyland.

To this day, the ride stands as one of the most instantly recognizable aspects of the Disney parks, which has naturally led to it being a subject of numerous references and tongue-in-cheek parodies in the media, including some made by Disney themselves. The popularity of the attraction has also resulted in getting a big line of merchandise and an online animated series

A movie for the attraction was announced in 2014; no details have since been announced.

Tropes shown in It's a Small World include:

With all due apologies if reading this page has made you start humming that song.