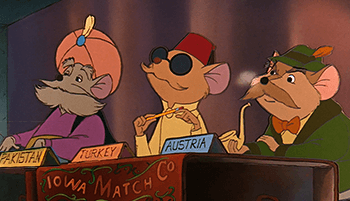 "We then pan up to get a clear shot of the big shots on the catwalk, and here's what we find: 1) a guy wearing an American army general's uniform, 2) an obviously Russian woman wearing a big Cossack hat, 3) a Yasser Arafat-type with a kaffiyeh on his head, 4) a dead ringer for Fidel Castro, 5) a black guy in a dashiki, and finally, 6) a Japanese guy in a business suit. Nope, not one single stereotype in the whole bunch."
— The Agony Booth, from the Batman & Robin recap

Reasons can vary. Sometimes, it's simply that the character in question is unorthodox, and it fits their personality or beliefs to wear it. Other times, it's more likely to be a case of ignorance on the part of the author, or maybe pandering to the Small Reference Pools. It is also a convenient way to invoke stereotypes, especially in days gone past. When you have lots of people from different cultures, it can be a quick way of pointing out that they're a diverse group — for example, Cosmopolitan Council members often dress in their stereotypical regional/national costumes. And sometimes, it's just the Rule of Cool coming into play (see Costume Porn).

See Analysis.Culture Equals Costume for specific variations. This trope is an important part in the portrayal of most countries featured in the Hollywood Atlas. Compare Overly Stereotypical Disguise.