Gratuitous Use of the Tallit 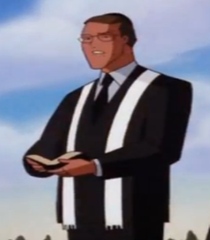 In the DCAU, not only can you wear a tallit to a funeral, but in a pinch a child's winter scarf is an acceptable substitute.
Advertisement:

The tallit, (also pronounced tallis depending on dialect) or Jewish prayer shawl is a religious item worn during prayer by Jewish men in orthodox and traditional circles, and also by women in more liberal Jewish movements.

The tallit is such a cool, exotic-looking visual-shorthand for "Jews Doing Jewish Stuff" that it tends to get used indiscriminately in TV, film, comic books and other visual media, almost always incorrectly.

Many Orthodox Jewish men do wear an undershirt-like garment called the tallit katan (or "small tallit") at all times to fulfill the Biblical commandment to wear a "fringed garment." But a tallit katan is not a full-fledged tallit, and is not visible except for small fringes which dangle from the beltline.

In most mainstream Jewish denominations and sects, the full tallit is only worn during weekday morning prayers, during morning Sabbath and festival services in synagogue, and on a few other very specific occasions. Even in synagogue, the tallit is only rarely worn during afternoon or evening services, and it's virtually never worn for most other religious observances. In some ultra-Orthodox communities, traditionally a man does not even own a tallit before he is married. (There are some sects which encourage their members to wear the full tallit all day long, but this is a very uncommon practice.)

Contrary to many media portrayals — and with the marginal sects noted above possibly excepted — you'd never see a full tallit worn:

A subtrope of Culture Equals Costume.