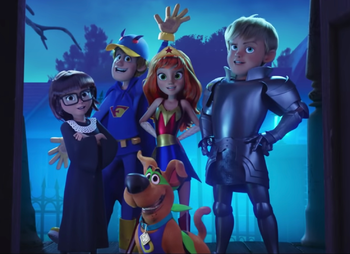 L-R: The Smart One, the comic relief, the Team Pet,
The Chick, and The Leader.
Ah, Halloween. The one night a year when everyone, not just cosplayers, can — nay, are expected to — dress up as any fantastical thing they want to be. Naturally, when given this freedom of self-expression, the choice of costume can reveal something about the wearer. (And to be clear, while the majority of such examples in fiction do happen on Halloween, this also applies for any other occasion when characters get to dress in their choice of costume.)
Advertisement:

If a character dresses up as a traditional heroic figure like Superman or a Knight in Shining Armor, they're probably our morally-upstanding protagonist. The Mad Scientist is the stock costume of a science nerd. A Girly Girl is likely to choose to dress up as a princess or a fairy. The Ms. Fanservice will wear a Sexy Whatever Outfit. And two people wearing paired costumes (Batman and Robin, Raggedy Ann and Andy) are normally a duo with a close connection, whether they're a romantic couple, Heterosexual Life-Partners, or something similar.

If seen later in the story, their costume choice usually reinforces what we already know about the character. But if this occurs early enough, it can serve as an Establishing Character Moment that can quickly bring the audience up to speed on essential character traits.

Can overlap with Halloween Cosplay if the character is dressing up as another known character. Compare Culture Equals Costume, which is a similar case of a wardrobe communicating personality. Contrast For Halloween, I Am Going as Myself, which has the lack of a costume as a key point.