Gravity Is a Harsh Seamstress 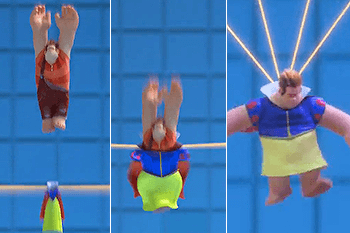 A character falling, usually between two skyscrapers in a city, hits a clothesline on the way down, and ends up wearing something from the line. If the buildings are tall enough, they can hit several lines, acquiring one item from each, resulting in a hilariously mismatched costume by the time they land. Alternately, they can get a full outfit off a single line. These can be combined, too, resulting in a gag where the character ends up with several impromptu changes of clothes before the sudden stop at the end.

In theory, this is possible in real life, but you'd have to fall perfectly in line with the clothing, somehow pull it off the line with you without tearing it, and still have enough time to fit your arms through the holes of your shirt before you land.

Compare To The Bat Pole. May be a variant of Human Snowball. Can result in a Coincidental Accidental Disguise. Trope Namer is a pun on Gravity Is a Harsh Mistress. Not to be confused with the Discworld Seamstresses, or with the slapstick convention of pants falling down.