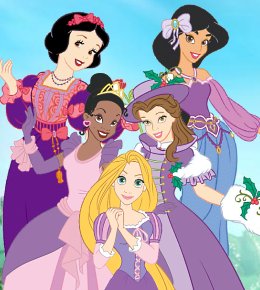 It's certainly lovely on these Princesses.* Top Row: Snow White, Jasmine. Middle Row: Tiana, Belle. Bottom Row: Rapunzel.
"This is my apartment and I like it! This is a girls' apartment! That [Chandler and Joey's] is a boys' apartment! It's dirty and it smells! This is pretty! It's so pretty! And look, it... and it's purple!"
— Rachel Green (voicing her refusal to leave Monica's apartment), Friends, "The One With the Embryos"
Advertisement:

A lady wearing purple as a sign of her femininity, whether she is girly and sweet, or graceful and mature.

For millennia, purple was the traditional colour of nobility because it was one of the most difficult (and thus expensive) colours to make with naturally occurring dyes. In fact, the Romans went so far as to make it a crime for anyone not of the nobility to wear purple in public, cementing its status in many cultures as the colour of The Beautiful Elite. This changed some time after the Industrial Revolution kicked into high gear, when synthetic dyes became the norm rather than the exception — as it so happens, one of the first colors made by coal-based dyes was mauve. So formerly expensive purple dye was now just as affordable as any other colour, and thus lost much of its association with wealth.

Then as colours began to take on their now-familiar gender connotations, purple found itself increasingly on the feminine side of the gender divide because it was considered a pinker version of blue. This trope is thus a merger of two associations: purple with nobility, and purple with femininity. And due to the historical significance of violets and lavenders in LGBTQ+ circles, purple can also be associated with lesbianism.

This colour is fairly common to see on a young girl, elderly matron, Spirited Young Lady, or princess (even if Princesses Prefer Pink).

Now even though this colour can be worn by girls of any age, older feminine women are more likely to wear this colour long after a girl who wore pink grew out of that colour.

This also tends to be a popular colour among blondes as the yellow/gold of the hair and the purple of the dress complement each other.

Just being a woman in purple isn't enough. It has to be a clearly feminine lady.

A Sister Trope to Pink Means Feminine (and can overlap with colours like fuchsia), True Blue Femininity.

And this poem was the inspiration for the Red Hat Society

, a social organization for women 50 and older, combining this trope with a playful touch of "Screw the (Fashion) Rules, I'm a Senior!".