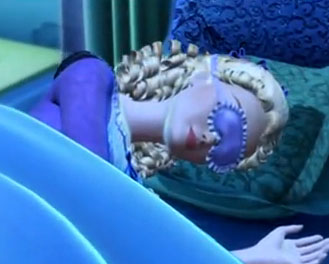 A mask without eye holes worn when a character is sleeping somewhere with too much light. Often they're seen on planes or trains; oddly enough, though, in fiction, they can appear in perfectly dark private bedrooms.

The Sleep Mask is used to give the audience clues about the personality of the person wearing one. It can signify:

The third is more often used for a man, but can also be used for women. For example, a woman with a Tomboy personality during the day might for contrast wear a sleep mask at night, or one might be used to emphasize one character's girly nature in comparison with another female cast member. The fourth, fifth, and sixth examples are often used for those who either love to sleep or have a huge preference to how they sleep, or indicate that they have difficulty sleeping without the masks.

Tropes that may apply: Spoiled Sweet, Spoiled Brat or Rich Bitch. Often but not always worn by the villainess.

Bonus points if the mask has painted eyes.