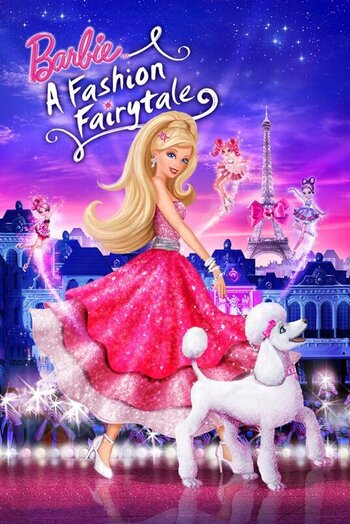 "Life is a fairytale."
Advertisement:

Barbie: A Fashion Fairytale is a 2010 Barbie movie. It is preceded by Barbie in a Mermaid Tale and followed by Barbie: A Fairy Secret.

This movie features Barbie as an animated actress (and later director) playing characters in movies (all previous Barbie movies, maybe). This one begins with Barbie in her latest movie, The Princess and The Pea, but has some creative differences with the director of the movie. He promptly fires her, sells the story to the Gossip Blogs, and then Ken breaks up with her.

When Grace and Teresa suggest that she take some time away from it all, Barbie decides to spend the last few weeks of summer vacation visiting her mom's older sister, Millicent, who lives all the way over in France. Barbie explains to her friends that her aunt's a fashion designer with her own fashion house in Paris, France—Barbie remembers how much she loved visiting her aunt's studio as a little kid and how much she's always looked up to her Aunt Millicent.

But after arriving at the fashion house (which is called "Millicent's") and meeting her aunt's assistant, a French teenager named Marie-Alecia (or "Alice" for short), Barbie learns some very distressing news: Millicent's business hasn't been doing so well, so she's planning on shutting down her fashion house and moving to the countryside. Not wanting Millicent to give up her passion/business, Alice tells Barbie the legend of magical creatures that have helped fashion designers over the years. They complete the ritual to summon them and discover that the Flairies (as they're called) get their power from the fashion house itself—if it's torn down, they lose their powers. So Barbie and Alice team up with the Flairies to design new pieces and hold a fashion show in order to save Millicent's business.

Meanwhile, it turns out that Ken's "break up" with Barbie was orchestrated by her rival, Raquelle—Grace and Teresa tell Ken that if he wants Barbie back, he has to go to France and make a "grand romantic gesture" to her in person. Ken does just that, but he gets into some rather...interesting situations along the way.

Magic happens when you believe in yourself.
— Barbie
Feedback

Millicent's rival and her ditzy sidekick.

Millicent's rival and her ditzy sidekick.