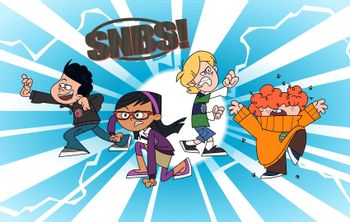 The universe is being destroyed by a virus that mutates people into monsters, and its only hope is a group of warriors given super powers by technology known as battle balls. When the Virus spreads to Earth, aliens Memnock and Zenblock are deployed to this strange, previously undiscovered world to recruit great warriors.

But because they know nothing about Earth, they end up recruiting twelve year olds instead.

The kids in question are leader and Only Sane Man Tyler Bowman; academic prodigy Jennifer Shope; Kevin Reynolds, a haver of bad ideas; and Theodore "Roach" Roachmont, who is... Roach. Hilarity Ensues, as these unlikely (and unqualified) heroes learn to control their new powers and fight to drive back the Virus before it destroys the Earth.

The first season debuted on Cartoon Network in the United States in Winter 2015, later making its Canadian premiere on Teletoon in Fall 2016 and becoming one of the last significant Canadian imports to come to CN before they were largely phased out in the following years. On January 11, 2018, the series was suddenly renewed for a second season

, which made its debut on Family Channel in Canada, with Hulu streaming it in the U.S.