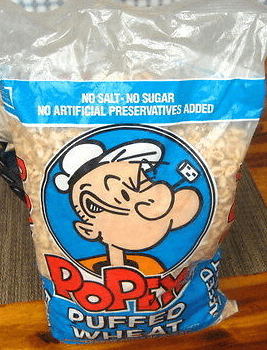 Yeah, we know—spinach, but he needs his carbs too.
Advertisement:

Companies want to ensure big sales. They won't take any unnecessary risks, so they won't release their products in the crowded, dangerous marketplace without something that will make them stand out. Even the littlest of the gimmicks can work.

Character Celebrity Endorsement occurs when the companies use fictional characters, but celebrities nonetheless (largely cartoon ones) to promote their products, even if the character or franchise featured has nothing to do whatsoever with the product at hand.