Western Animation / The Pirates! In an Adventure with Scientists 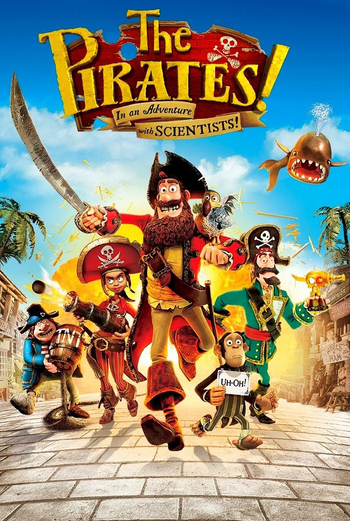 It's a plunderful life.
"It's only impossible if you stop to think about it!"
Advertisement:

The Pirates! In an Adventure with Scientists! (also called The Pirates! Band of Misfits outside of the UK) is a Claymation film directed by Peter Lord and created by Sony Pictures Animation and Aardman Animations, their first stop-motion feature since The Curse of the Were-Rabbit, based on the pirate stories of Gideon Defoe.

The film features a nameless crew of pirates (who are only referred to by description, as in "The Pirate With Gout," "The Albino Pirate," and "The Pirate Who Likes Sunsets and Kittens") who aren't very good at piracy but are incredibly enthusiastic about it. The Pirate Captain is obsessed with winning the Pirate of the Year Award so he can at last earn the respect of his peers, but his incompetence renders this almost impossible.

To earn the prize, the crew navigates a ridiculously exaggerated caricature of Victorian London, running afoul of Charles Darwin, Jane Austen, and the Elephant Man, and braving the hellish wrath of Queen Victoria (whose official royal motto is "I hate pirates!").

After his crew desserts him, the Pirate Captain tries to make it on his own, with despressing results.

After his crew desserts him, the Pirate Captain tries to make it on his own, with despressing results.