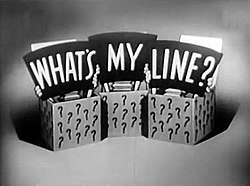 Game Show from Goodson-Todman airing on CBS from 1950-67, in which a panel of four celebrities asked yes-or-no questions to determine the occupation of the contestant seated next to the host. Each "no" response gave the contestant $5, and ten "no" answers ended the game.

Once an episode, a special celebrity would appear as the "Mystery Guest". For this, the panel would be blindfolded and the guest would usually try to disguise his voice.

For most of the CBS era, the panel consisted of publisher Bennett Cerf, sometimes-controversial columnist Dorothy Kilgallen, actress Arlene Francis, and a guest panelist. The early stages of the show had different lineups. Poet Louis Untermeyer was a regular from the first program until he was removed due to his alleged links to Communists. By early 1951, the panel was Cerf, Kilgallen, Francis and comedian and writer Hal "Dimples" Block. Block was fired in 1953. His seat was then taken by Steve Allen for a year and then radio star Fred Allen. With Fred's death in 1956, the seat became rotating. Ernie Kovacs was considered a regular by some during 1957. Other than that, the 4th seat became a spot for guest panelists. Arlene's husband, actor Martin Gabel, appeared over 100 times, more than any other guest panelist. When Kilgallen died in 1965, her seat became a second rotating guest spot.

What's My Line? holds the record for the longest-running Game Show in network primetime. After its CBS run, it went into daily syndication from 1968-75. Unlike its sister shows To Tell the Truth and I've Got a Secret, it hasn't returned to the airwaves within the last 35+ years despite numerous attempts.

A separate radio series ran from 1952-53, which John Daly would plug during his closing remarks.

GSN regularly aired repeats in its Late Night Black & White block, but eventually dropped said block of programming due to low ratings, though they still air the program once a year around the Christmas holidays, apparently because they have to do this to keep the rights. A number of episodes have been released on low-budget DVD, but fans who want to see more would do well to Keep Circulating the Tapes. It currently airs weekday afternoons on the diginet Buzzr. Additionally, two "seasons" of episodes from 1955 have been released to watch for those subscribed to Amazon Prime, or its video service, courtesy of Buzzr. These episodes, unlike the broadcasts on GSN, include the full-length adverts seen on the program for Stopette and Remington Rand. More than 750 episodes have also been posted to the Youtube channel aptly named What's My Line?