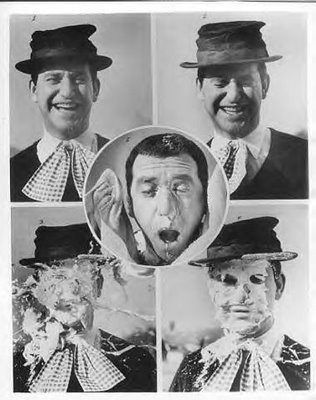 The Splat in the Hat
"Hey, kids! I want you to tiptoe into your parents bedrooms, look in their pockets for all the green pieces of paper with the pictures of the guys in beards, and send them to Soupy Sales at Channel 5 in New York."
A joke that backfired leading to a two week suspension of his show.
Advertisement:

Milton Supman (January 8, 1926 – October 22, 2009), better known by his stage name Soupy Sales, was an American entertainer who worked in films, radio, and television. He is best known for his raucous children's TV shows which ran on-and-off between 1953 and 1978, which featured frequent ad-libbing, puppets, and what became Sales' trademark: getting a Pie in the Face for a particularly groan-worthy punchline.

In the 1980s, Sales was the voice of Donkey Kong on Saturday Supercade.