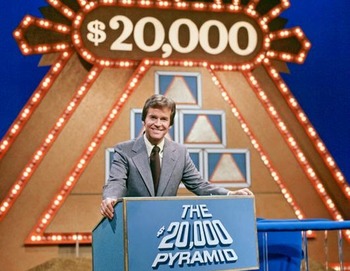 This is the $20,000 Pyramid!
For the page about pyramidal buildings, see Build Like an Egyptian.
Advertisement:

Pyramid is a game show format that began on March 26, 1973 as The $10,000 Pyramid. It was created by Bob Stewart, also the mind behind Password. Unlike Password, however, the Pyramid franchise was largely produced by Stewart himself (with assistance from son Sande in the 1980s). It has a format similar to Password in that a contestant is trying to describe a word to a celebrity partner, but instead of being a one-word clue, the contestant has to give several clues to a set number of words (usually seven) within a time limit, and using virtually any form of verbal clue-giving. Whoever got more points in six rounds moved on to the Bonus Round, called the "Winner's Circle", in which the game was essentially reversed. In the Winner's Circle, the clue giver is shown six categories, and has to give a list of objects that fit each category.

The show lasted in several forms in every year from 1973 to 1988, generally increasing the dollar amount in the title with each new version. What started as $10,000 became $20,000, $25,000, $50,000, and even $100,000 over time. Dick Clark hosted most of the 1973–88 versions, except for the original $25,000 version which was hosted from 1974-79 by Bill Cullen. A $100,000 revival was syndicated in 1991 with John Davidson as host. What's currently Sony Pictures Television acquired Stewart's company shortly afterwards, and after failed pilots during the 1996-2000 period (one of which, Pyramid Rocks, had a rock music theme), the show returned from 2002 to 2004 as just Pyramid, with Donny Osmond as host. (For this reason, it's more commonly known as Donnymid.) This new version introduced several rule changes that many fans of the show disliked, lax writing and judging, often-clueless celebrities, and a hyperactive host.

Two $1,000,000 pilots were taped in New York in 2009 (one with Tim Vincent as host, the other with Dean Cain) for CBS; they passed it up for a revival of Let's Make a Deal. They tried to pitch it again in 2010, but lost out again, this time in favor of The Talk, a mother-oriented talk show fronted by (among others) Big Brother host Julie Chen note Chen is also the wife of CBS executive Les Moonves, leading to suggestions that nepotism was the cause. Three more pilots, now back to $25,000 (with a $500,000 tournament planned) and with Andy Richter as host, were taped for TBS on June 22 and 23, 2010.

After having been trapped in Development Hell for eight years, GSN finally raised the curtain on a new edition, now simply titled The Pyramid, on September 3, 2012, with Mike Richards (not Kramer, but the executive producer of The Price Is Right and future executive producer of Jeopardy!) as host. This version (much like the $1,000,000 pilots) served as a back-to-basics refresh after the massive changes with Donnymid, and included a unique way of determining the Winner's Circle prize (see below). The series lasted only 40 episodes before being cancelled due to low ratings.

A revival of the $100,000 format premiered on ABC on June 26, 2016, hosted by Michael Strahan, offering top prizes of $50,000 and $100,000 in the Winner's Circle. Due to his commitments to Good Morning America, the show returned not only to ABC, but also to New York, having taped there from 1973 until 1982 note (with the exception of a brief stint in the 70s at Television City) and for the 2009 CBS pilots. The revival is part of ABC's "Sunday Fun and Games" block alongside the returning Celebrity Family Feud and an also-NY-based reboot of Match Game hosted by Alec Baldwin; all three shows, plus the revival of To Tell the Truth, have been renewed by ABC for summer 2017 (also joined by a revival of The Gong Show).

Not to be confused with the 1988 documentary of the same name.

These are your subjects, we have...