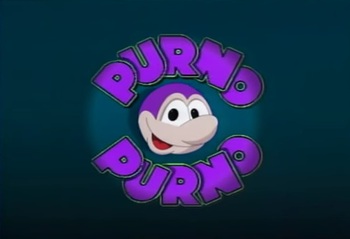 The series is about a purple-suited man named Purno, who frequently finds himself in bizarre situations along with very strange individuals. The plot starts with a princess having her beauty stolen by a group of thieves, leading to Purno to go on a adventure to retrieve her beauty. After that ends... well, that's when it fully dives into Mind Screw territory.

Originally airing on VPRO in 1989, the surreal, bizarre exploits of the purple-suited man proved popular with adults, teenagers, and children alike (due to airing on a children's timeslot, of all things). The series would later continue until 2007, with a total of five shows.

In 2001, VPRO aired a Spin-Off called Purno Poseert, which depicted a CGI Purno in the real world interacting with Dutch celebrities (serving as a crude documentary series).