Western Animation / Puppy in My Pocket: Adventures in Pocketville 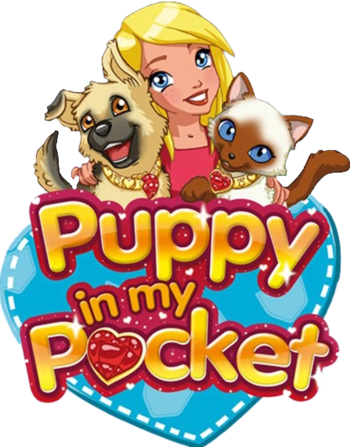 What do you get when you cross Littlest Pet Shop with My Little Pony: Friendship Is Magic along with a splash of Fatal Frame? You get this cartoon.

Puppy in My Pocket: Adventures in Pocketville (Italian: "Cuccioli Cerca Amici: Nel Regno di Pocketville"note "Puppies Searching For Friends: In the Kingdom of Pocketville") is a 2010-2011 animated TV series based on the titular toys. It features whimsical adventures as Flo (Kate in the English version) and her puppy Magic must help the animals of the Pocket Kingdom make their way to children in the real world and try to get Princess Ava (Ami in the original), who was teleported to the real world by her sister, Eva (Ima), back to Pocketville.

The English dub was directed by Mark Hanna, who also provides the voice for Magic in the UK dub. This show was produced at Cinecittà film studios located in Rome, Italy. It is produced by Giochi Preziosi, Morrison Entertainment Group (MEG)note The original creators of the "...in My Pocket" franchise, which began with Monster in My Pocket., and Mondo TV. The series premiered on Boomerang in the United States on January 2, 2012. As of this writing it can also be seen online on the Popcornflix website, Prime Video, and various reuploads on YouTube. As of November 2020, the episodes on Mondo TV's Mondo World YouTube channel have since been taken down, making it harder to find HD screenshots for the show’s wiki.note However, as of this writing, a channel by the name of The Pocketville Vault has reuploaded all the episodes in their highest definition possible.