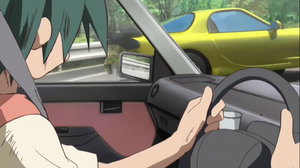 "It seems I've taken a wrong turn into my PlayStation."
"Why's there so much molten lava? Yet so few polygons?"
— Shirou in the Fate/stay night fan comic "Wouldja Like Some Making Fuck?" by *veloxiraptor
Advertisement:

CGI allows you to consistently animate complicated images (like Instant Runes) and moving objects with regularity and ease. It was embraced by many animators because it allows for good animation sequences without totally sacrificing the budget or scheduling for the rest of the scenes in a show. Unfortunately, this means that, when done without a lot of care, it stands out considerably compared to that of 2D animation. Techniques in digital inking (such as Cel Shading) can alleviate this by blending the CGI with the rest of the animation. As a result, the gradual disappearance of the conspicuousness of this trope can be largely chalked up to the fact that Technology Marches On.

The limitations of early computer rendering technology and an overall lack of experience in the field by most animators led to many of the examples listed, although some can be attributed to studios resorting to CGI just to speed the process up. The ironic problem is that a CG model looks too perfect; it moves too smoothly and creates a jarring 3D effect in an otherwise 2D universe. If done well, the CG models don't stand out (Disney has been using CGI since the 1980s in small amounts, which were hardly noticed). This trope is for when they do.

Sometimes, of course, CG visuals are deliberate. A character may be in deliberately obvious CGI as a stylistic choice, such as the Hydra from Disney's Hercules, since it allowed for more heads, and the flames of Hades' head, and Rule of Cool meant nobody cared. Sometimes it's a form of Painting the Medium to indicate that the thing is fundamentally different. Sometimes it's blended, like in Treasure Planet. But when it's used as a cheap shortcut, it just clashes horribly.

This trope is only for 2D animated works with noticeable CG elements. For when CGI is conspicuous within a live-action work (or for other, practical bad effects), see Special Effect Failure. See also Uncanny Valley, which the CGI can evoke. Often crops up in games with a Sprite/Polygon Mix.

For when everything is CG, see All-CGI Cartoon. Voluntarily switching between or mixing CG and another animation style is Medium Blending.

open/close all folders
Advertising
Anime
Whisper: This is only happening because we had the villain trapped, so she had to turn into a CGI monster to make the movie more exciting!
Asian Animation
Comics & Manga
Fan Works
Films — Animation
Music Videos
Pinball
Video Games
Web Animation
Webcomics
Western Animation
Feedback

An obstacle course which both FreeSmart and W.O.A.H. Bunch cross to get to the Yoyle tower, the real summit of the mountain.

An obstacle course which both FreeSmart and W.O.A.H. Bunch cross to get to the Yoyle tower, the real summit of the mountain.