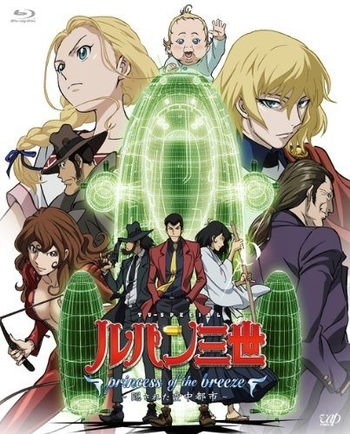 Lupin III: Princess of the Breeze note princess of the breeze ～隠された空中都市～ (Purinsesu obu za Burizu - Kakusareta Kūchū Toshi) is the twenty-fourth Made-for-TV Movie in the Lupin III franchise. It debuted on November 15, 2013, and has yet to have an official English language release.

This year's Art Shift is rather interesting, including elements of the Return of the Magician OVA, a The Castle of Cagliostro influencenote the ending theme in this special is a new version of "Fire Treasure", originally from Cagliostro, amongst other elements, as well as newer art elements, such as shiny wet eyes in almost all of the characters.

Due to diminishing ratings, this was the last new yearly special for six years, until 2019's Goodbye Partner. note The special for 2015 was a Clip Show of three edited episodes from Lupin III: The Italian Adventure with some new framing animation.

The story opens in the Paris night. Shots switch around, showing the airship, the party, and the city below. Then a new airship arrives. It's a group of pirates that attack the ship, and knock out the guards. As two of them prepare to return to their ship, a guard has followed them up. The guard and one of the pirates fight, and we discover the guard is Lupin III and the pirate is a cutie! One slap later, and the pervert is falling off the airship, into the river.