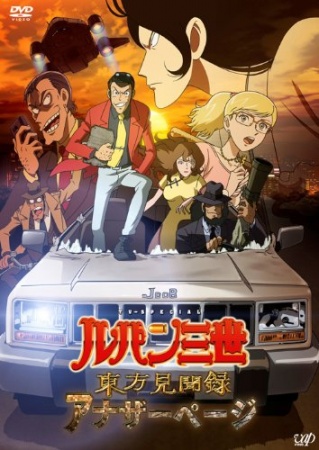 Lupin III: Travels of Marco Polo - Another Page note 東方見聞録 〜アナザーページ〜 (Tōhō kenbunroku - Anazā Pēji) is the twenty-third Made-for-TV Movie in the Lupin III franchise. Directed by Hajime Kamegaki, who previously did Seven Days Rhapsody and Lupin III vs. Detective Conan, it debuted on November 2, 2012, and has yet to have an official English language release.

The Lupin franchise again goes through an Art Shift, this time back to the mid-1990's character designs found in The Pursuit Of Harimao's Treasure and Dragon Of Doom. There's also some design influence from the 2009 Lupin III vs. Detective Conan special, likely thanks to Kamegaki's involvement.

It seems Lupin has gone too far this time. In trying to get hold of "Another Page", a lost entry in Marco Polo’s legendary journal of travels, did the master thief really kill an innocent archaeologist? The victim’s granddaughter Lisa thinks so, which makes things all the more complicated when Lupin and Jigen pose as ICPO officers and take her into their care. They're protecting her from Lombardo Heavy Industries and its ruthless "salesman" Bernardo, merchants of war who are also after Another Page for their own dark, profit-making purposes. Throw in an imprisoned Chinese mafia boss, a mysterious monk training Goemon, and, as usual, the persistent Inspector Zenigata, and things get really complicated as all parties converge to find out the true nature of Another Page.