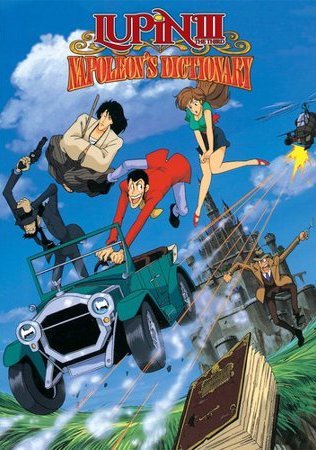 Don't look where Lupin is looking...

Lupin III: Steal Napoleons Dictionary note ナポレオンの辞書を奪え is the third TV special created for the Lupin III franchise and was released in 1991. Like the previous two specials, it was directed by Osamu Dezaki. It received an English sub release from Discotek Media in 2015.

Lupin hatches a plot to steal Napoleons Dictionary, which is being offered as a prize to the winner of a historic car race from Madrid to Paris. He is after the dictionary not only to see whether it is true that Napoleon excluded the word "Impossible" from his book, but also because the location of the hidden Lupin Empires treasure is written in its pages.

At the same time, the G7 nations of the world are all after Lupin, thinking that if they find him, they can find his family treasure and pay off their economic debts.So begins a global manhunt for the thief, as Lupin and his gang race to find the dictionary and the treasure first.

The TV Special contains examples of the following tropes: