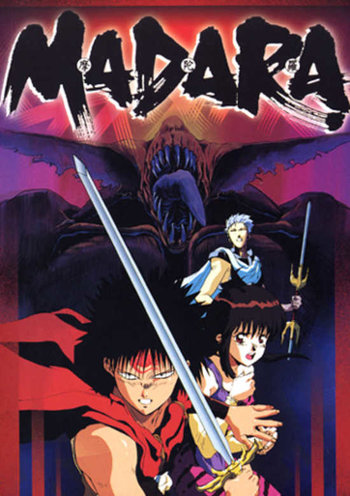 Madara (Moryo Senki Madara) is a High Fantasy manga by Eiji Otsuka and Shou Tajima, more famous by their work in MPD Psycho and the anime sequences of Kill Bill. Published from 1987 to 1994, it originated a multi-media franchise composed of supplementary manga series, novels, videogames, and a two-episode OVA adaptation released in 1991.
Advertisement:

Our protagonist is Madara, a young apprentice blacksmith that roams the world along with his grandfather Tatara, offering their services as makers of mechanical limbs. Madara's fate, however, changes when the village they are staying in is invaded by the Mouki, demons sent from the evil Emperor Miroku. After witnessing the death of his grandfather, Madara learns that his own mechanical body contains an immense power of mysterious origins, which he uses to defeat the fiends. Now set out on a mystic quest to end the threat of Miroku once for all, and accompanied by his female friend Kirin and the rebel princes Seishinja and Chaos, Madara starts a journey into the unknown world to face challenges beyond his imagination.

The franchise is best known outside Japan (though still not very much) for its varied videogames. The manga being originally published in a videogame magazine also helped.

Definitively not related or to be confused with Madara Uchiha.