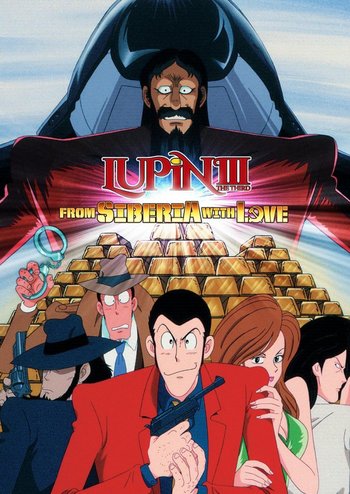 Lupin III: From Siberia With Love, originally released as From Russia With Love note ロシアより愛をこめて (Roshia yori Ai o Komete) is the fourth TV special created for the Lupin III franchise and was released on July 24, 1992. Like the earlier specials, it was directed by Osamu Dezaki. It received an English sub release from Discotek Media in 2015, which went under the working title of Bank of Liberty before being finalized as above.

A lost cache of Romanov gold to the tune of five hundred tons has turned up in the United States, and Lupin III has his eye set on it. Together with Jigen and Fujiko, the three set up a heist at a bank in Texas that happens to double as a bank for thieves to keep their stolen treasures safe until the heat has died down.

But other parties are interested in the legendary lost treasure. Among them are the Cartione mafia family, who have sent two operatives, Big and Lucky, after Lupin and his gang. An American woman named Judy Scott who seemingly gets involved by a chance encounter with Lupin is involved more deeply than she initially lets on. But the most dangerous of all is Rasputon, a descendant of the Mad Monk who has telepathic powers and controls a global cult with influence that runs all the way up to heads of state. Rasputon further complicates matters by stealing Zantestuken, forcing Goemon to be his bodyguard and turn on his allies in exchange for the sword's return.

As the heist goes down, double-crosses are made, and everyone descends on Rasputon's stronghold in Siberia to sort things out, who will end up with the lost fortune of the Romanov family?

The TV Special contains examples of the following tropes: