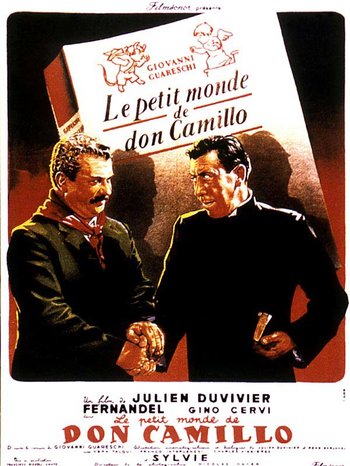 Little World of Don Camillo (Italian: Don Camillo; French: Le Petit Monde de don Camillo) is a 1952 Italian-French comedy film directed by Julien Duvivier, starring Fernandel and Gino Cervi. It is the first film of the Don Camillo franchise. It is based on the novel Don Camillo (1948) by Giovannino Guareschi. René Barjavel cowrote the screenplay.

Don Camillo (Fernandel) is a catholic priest in Brescello, a village in the Po Valley in post-World War II Northern Italy. The communists won the election and their leader Giuseppe Bottazzi aka "Peppone" (Cervi) becomes the new mayor. Camillo and Peppone were both members of the Resistance during the war, but they are also bitter rivals for political and spiritual supremacy over the small community.

Followed by a sequel, The Return of Don Camillo.