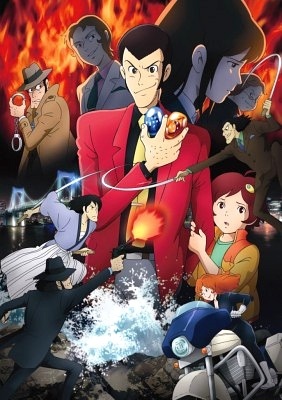 Lupin III: Blood Seal ~Eternal Mermaid~ note 血の刻印 〜永遠のMermaid〜 (Chi no Kokuin - Eien no Māmeido is the twenty-second Made-for-TV Movie in the Lupin III anime franchise. It was directed by Teiichi Takiguchi, who went on to be an animation director for Part 4. The special debuted on December 2, 2011 to a modest viewing audience.

Made to celebrate the 40th Anniversary of Lupin III on television, the special brought a number of changes to Lupin. The first notable one is the major art style changes to the Lupin characters; past specials for the last decade had relied on designs largely derived from Shin Lupin III, the second TV series. TMS, which was involved with the early days of Lupin, came back to do the animation for Blood Seal, and accordingly the designs were redone to evoke the early years of the first series and the proto-Studio Ghibli designs used in The Castle of Cagliostro.note  TMS has always been in charge of Lupin animations. However, after the franchise reboot in 1989, the studio simply acted as producer rather than animating it in-house. Discotek Media announced they were bringing over the special, with a new dub featuring the Red Jacket cast. This makes it the second of the Lupin III Yearly Specials to get a dub outside of Funimation's block, and the first special dubbed since 2005.

The second change was the first major shakeup of the Lupin cast since Kan'ichi Kurita took over the role of Lupin in Farewell to Nostradamus, following the death of original seiyuu Yasuo Yamada. It was announced with this special that the long-time voice actors for Zenigata (Gorō Naya), Fujiko (Eiko Masuyama), and Goemon (Makio Inoue) had retired; they were replaced with Kōichi Yamadera, Miyuki Sawashiro, and Daisuke Namikawa, respectively. This cast change left Kiyoshi Kobayashi, the voice of Jigen, as the only original Lupin voice actor remaining until 2021.

The movie opens with Lupin being ordered at gunpoint by crime boss Toudou to steal a precious gem, the Mermaid's Scale, at an upcoming black market auction. Although he succeeds, things go badly wrong when a bomb goes off shortly after he departs. In addition, a perky and persistent 14 year-old popcorn vendor and would-be thief, Maki, begs Lupin to make her his apprentice in crime. Combined with another gem, the Dragon Scale, owned by the sinister head of a medtech company, a mysterious waif of a girl who seems to defy death, and a treasure that Lupin's own grandfather seemingly failed to steal, the gang becomes tangled in a dark and mysterious plot for the treasure of mythological figure Yao Bikuni... and possibly the secret of immortality itself.