Western Animation / Superman vs. the Elite 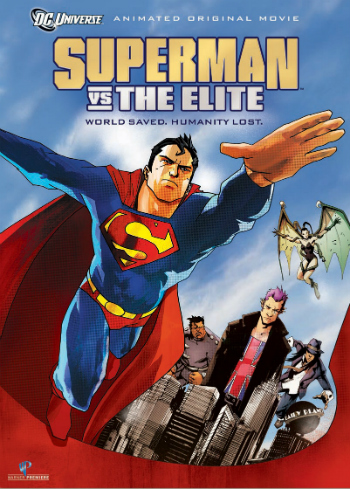 Manchester Black: You think that's it? It's not over, you poncy twit. If you think I'll just go to jail and rot, you're living in a dream world!
Superman: Good. Dreams save us. Dreams lift us up and transform us into something better. And on my soul, I swear that until my dream of a world where dignity, honor and justice are the reality we all share, I'll never stop fighting. Ever.
Advertisement:

Superman vs. The Elite is a movie in the DC Universe Animated Original Movies line based on the Superman story, "What's So Funny About Truth, Justice & the American Way?" (Action Comics #775), centered on the Man of Steel dealing with a new group of anti-heroes called "The Elite", who kill criminals, earning them public acclaim. Superman opposes this, and attempts to take them down before things get worse.

The plot in both the original comic and the movie is based on Superman's effectiveness at being a superhero in the much darker, cynical world of comics that grew in the 90's, ultimately questioning if his old fashioned moral standards are still relevant against the more ruthless villains of the present day.

The voice cast features George Newbern reprising his Justice League role as Superman, David Kaufman reprising his DCAU role as Jimmy Olsen, Pauley Perrette as Lois Lane, and Robin Atkin Downes as Manchester Black, leader of the Elite. On top of that, the writer of the movie is Joe Kelly, the same man who wrote the original comic the movie is based around.

Superman vs The Elite

After taking a beating from the Elite, Superman pretends to finally let go of his mercy and kill off its members. The results are horrific, and this isn't all of it.

Alternative Title(s): Superman Vs The Elite

Superman vs The Elite

After taking a beating from the Elite, Superman pretends to finally let go of his mercy and kill off its members. The results are horrific, and this isn't all of it.