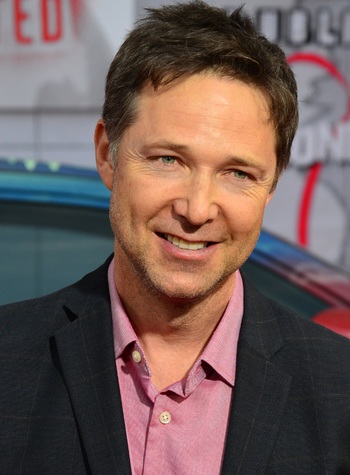 Some would call him super.
On your knees. I want you to beg for my description.
Advertisement:

His tenure as Superman started on Justice League, when he replaced Tim Daly, who'd voiced the character on Superman: The Animated Series, but was busy with other obligations. After a rough start during the first season of Justice League and a lot of complaining from fans, Newbern found his footing during the show's second season and was then embraced by fans as being a perfectly good Superman in his own right. Much like Daly did in Superman: Brainiac Attacks, the Superman/Batman movies and Justice League: Doom, Newbern has also reprised the role of Superman in The Batman, Superman/Shazam!: The Return of Black Adam, Superman vs. the Elite, the Injustice series, and later DLC for DC Universe Online.

Other credits include Apollo 14 astronaut Stu Roosa in From the Earth to the Moon and the voice of the title character of the infamous Theodore Rex.