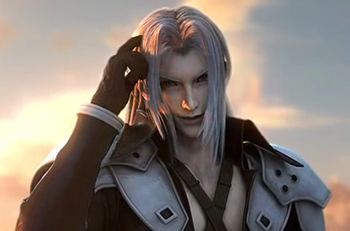 (This may be best read in Japanese, with the voice of Toshiyuki Morikawa, or in English, Lance Bass, George Newbern, Tyler Hoechlin, Cloudstrife8 or Ovarku.)

Hmph. So, one of the traitors deigns to speak to me. You are brave, but foolhardy. Perhaps you need to be taught your place under my feet. But your foolish courage intrigues me, so I shall speak to you a bit longer, and if you entertain I may let you survive this encounter.

I am Sephiroth, originating from Final Fantasy VII and now spread far beyond to other worlds. But of course you should not need to be told that. My very name has struck terror into hearts bolder than yours. For years I have traveled the streams of video game history, watching, waiting, and learning. It is a certainty that my next coming shall be upon us soon, in some form of another. Until then, I shall tell you of the path that has brought me here.

Once, I was a humble soldier fighting for the Shinra Electric Power Company. I was a renowned and beloved hero, famous for my exploits in the Wutai War, and feared by all for my unrivaled battle prowess. And they were not unhappy days, not mostly. I had friends, I had comrades. I was the most powerful and respected man on the Planet.

Then came the Nibelheim mission.

The events of those few days have been obscured by Shinra propaganda and cover-ups, and I confess even my own memories have blurred. Whatever precisely occurred, that day I was made aware of my true heritage. I discovered I was a prototype biological experiment conducted by Shinra, created from the genetic materials of a frozen creature named "Jenova". Jenova was the last of the Cetra that had once spread their great civilization across the planet, until the humans abandoned them to die at the hands of a mysterious disaster. Enraged, I put the town to the torch and attempted to claim my mother's remains. Before I could rejoin my mother again however, fellow SOLDIER Zack Fair attempted to thwart my reunion with mother and even took me on in battle. A futile gesture. After that nuisance, I continued as I did before, but then he, that ignorant puppet Cloud Strife, to my great shame, caught me off-guard and threw me into a pit of Mako energy.

I died that day, strictly speaking, but I would not let this stop my ambitions. I ascended to something greater. My spirit entered The Lifestream and I traveled its depths, learning ancient and forgotten knowledge, my powers and knowledge increasing beyond anything a human could ever achieve. Years later I put my plans into action. Using my mother's remains, which I now had psychic control over, I used her shapeshifting abilities to form a new body for myself, and began seeking the Black Materia. With it I could summon the ultimate destructive magic, Meteor. I would summon Meteor to strike the Planet, and when the Lifestream emerged to heal such a heavy wound to the Planet, I would be there in the impact crater. I would absorb the Lifestream to become a god.

During my search I took vengeance on the puppet Cloud, toying with his false memories and leading him across the Planet until he delivered the Black Materia to me himself. In one of my most infamous acts, I slew a little flower girl in his company before his very eyes. She commanded the White Materia that could cast Holy, the only force that could stop Meteor. Cloud and his friends descended into the depths of the Northern Crater, where my physical body had reformed, and killed me again. Holy stopped Meteor's descent and my plans were foiled, but my spirit again endured in the Lifestream. Some years later I completed a second resurrection and again attempted to take control of the planet, but was once again, defeated.

What has become of me now? Who can say? Most certainly my spirit still endures within the Lifestream waiting a day when I can rise again. Until then, wait. I swore once I would never be just a memory of the people, and I will make good on that promise.

I have made numerous appearances in spin-off media. I have battled Keyblade masters, martial artists, and banded with other Final Fantasy villains to battle my enemies beside them. In some more lax moments of recreation, I have indulged in musical performances and played board games. I have also contested in a DEATH BATTLE!, facing the half-demon known as Vergil to my victory. It also seems that my original story is getting an encore. Although this time around, I didn't go in blind. And now I have been chosen to participate in that grand contest with Cloud - to bring despair not to beings from across the Final Fantasy worlds, but from many others, starting with the angelic being Galeem, who thought itself to be the true supreme being of its plane. And apparently, that insignificant Keyblade-wielding boy has entered into Smash? I do not know whether it was a fluke or desperation, but now I've two adversaries I must crush under my foot. Nevertheless, I will finish what I started at Olympus Coliseum and over at Radiant Garden.

Below you will find a listing of tropes collected to enlighten you further to my great legacy. Read them now and leave my presence, for you have begun to annoy me and my patience has become thin. Dare speak to me once more, and you will never speak to anyone ever again.

Your mortal mind could barely understand my power, but these tropes may help you grasp the basics.