Video Game / Injustice: Gods Among Us 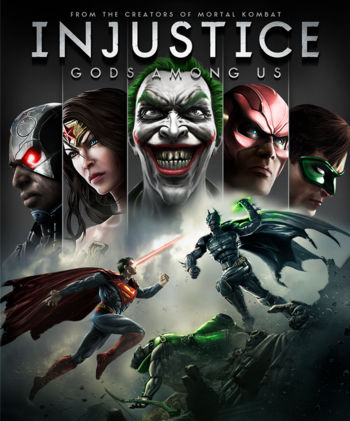 Injustice: Gods Among Us is an April 2013 DC Comics Fighting Game developed by NetherRealm Studios, the company behind the Mortal Kombat reboot in 2011. The game the first installment of the Injustice franchise.

The game's story is set in an Alternate Universe where Superman abandons his principles following the death of his wife Lois Lane and the destruction of Metropolis at the hands of the Joker and Harley Quinn, causing him to murder the Joker in cold blood, much to Batman's horror. Sometime later, Superman declares his intentions to rid the world of all crime and tyranny to the United Nations, with him and Wonder Woman reforming the Justice League into a police force to enforce the will of their One Earth government, causing Batman to rebel and form a resistance group composed of badass normals, vigilantes and novice metahumans to fight against Superman's authoritarian government. However, years of fighting leaves Batman as the only active member of the resistance after most of his team is either killed, wounded or deserted, forcing him to use a device built by Lex Luthor to summon a Justice League from another universe, a universe where they are still paragons of hope and justice.

The game has a similar gameplay to 2011's Mortal Kombat reboot but with a few additions such as a interactive objects in the stages with the characters with Super Strength having the ability to use heavy objects to attack their opponent while badass normals use those objects to evade attacks. Also, there are stage transitions that can be triggered using a heavy attack on a specific part of the stage, and each character have a special ability unique to them such as Superman having a short damage buff, Wonder Woman changing her fighting style from barehanded to a heavier sword & shield style and Aquaman summoning a water shield that increases defense.

Has a tie-in comic, Injustice: Gods Among Us, and a sequel, Injustice 2. The film Injustice, a DC Universe Animated Original Movies project serving as an adaptation of the game and its comic tie-ins, was released in 2021.

Injustice: Gods Among Us contains examples of:

Example of:
Make an Example of Them