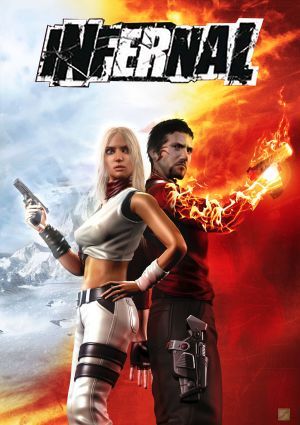 Infernal is a Third-Person Shooter developed by Metropolis Software, published by Playlogic, and distributed by Eidos. It was released on PC in 2007, then ported to Xbox 360 in 2009.
Advertisement:

In the world of Infernal, both Heaven and Hell are represented on Earth by their own militant organisations - EtherLight for the former, and the Abyss for the latter. The game follows a character named Ryan Lennox, who used to be an angel with EtherLight but was sacked for what's implied to have been excessive snarkiness, insubordination, and general loose-cannon-ism. Lennox promptly finds that his former employers, not content to sack him, are now trying to kill him, and he soon after accepts a job offer from the competition. The rest of the game sees Lennox chasing after a big, secret, increasingly sinister-looking project being implemented by EtherLight, while knowing perfectly well that his new boss is unlikely to have beneficent motives for wanting to get hold of it either.