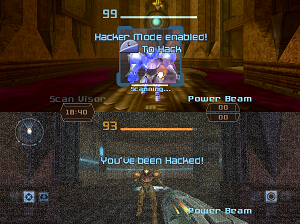 "Everything can be hacked...and everyone."
— Sombra, Overwatch
Advertisement:

So, you are fighting robotic enemies. Maybe it's a Robot War or your enemy just uses computer controlled robots as soldiers. Why not hack some of them? You can turn them off without a fight or—even better—reprogram them to think you are their commander and their commanders and allies are their enemies, so you get free reinforcements and ideal infiltrators.

For biological alternatives, see Puppeteer Parasite, Brainwashing, and Mind Control. You may notice that they are much more "evil" things to do, presumably because even Ridiculously Human Robots lack a "soul" of some sort and therefore it is not a bad thing to completely alter their personalities. Can lead to a Face–Monster Turn or Apologetic Attacker.