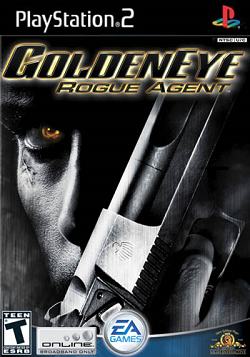 I wanna stare fear in the face
I wanna take it all the way
Advertisement:

The one where you play the baddie.

GoldenEye: Rogue Agent is a video game released in 2004. Electronic Arts has the James Bond license and based on their previous efforts, they decided to use the name of GoldenEye for their next game. They wound up creating an In Name Only game that takes place in a non canonical world.

You play as a freelance agent who was fired from MI6 for your ruthless and evil methods of getting the job done. You are soon recruited by Auric Goldfinger who is tangled in a turf war with Dr. Julius No, who happened to have shot one of your eyes out during a mission a few years previously. It is replaced with an electronic eye made out of gold, which is capable of projecting force fields and magnetic fields to protect yourself while continuing your mercenary work.

Preceded by Everything or Nothing and followed by From Russia with Love.