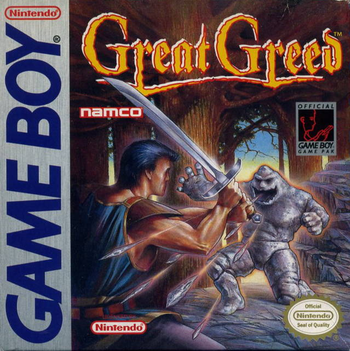 Saving the environment has never been so action-packed!
Advertisement:

Great Greed is an obscure Game Boy RPG released by what is now Bandai Namco Entertainment in 1992 in Japan, and 1993 in North America. Its Japanese name was Vitamina Kingdom Story.

The player character, called Sierra Sam, is enjoying their life in the real world until the Call to Adventure beckons. The fantasy world of Greene is slowly dying because of the evil Bio-Haz, who's polluting the realm to empower his army, and it's up to Sam to stop him before all is lost. Along the way Sam meets several other characters, who are all named after food for some reason. With a land in peril, it's up to you to stop the pollution at its source and save Greene's lush environments.

The game is notable for customization that was ahead of its time in 1992, such as mapping attacks to certain buttons in battle, autosave, and the first Gay Option in a video game that successfully made it overseas.