Literature / The Day of the Jackal 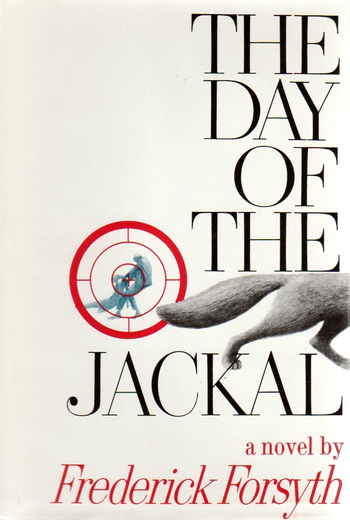 "The day of the Jackal was over."
Advertisement:

Frederick Forsyth's most famous novel, by some margin.

The year is 1963. Following a a deeply divisive and costly Civil War, French President Charles de Gaulle has granted independence to Algeria. His decision is seen as a betrayal by many of his former supporters. A disenchanted paramilitary group, the Organisation de L'Armée Secrète (OAS), has vowed to kill de Gaulle in revenge but each plot has failed. In desperation, the OAS turn to a mysterious foreign assassin, known only as "The Jackal", to carry out the job. The government learns of the plot, but know nothing of the would-be assassin besides his code name. So they call upon the best detective in France: Deputy Commissioner Claude Lebel, who is given unlimited authority to capture or kill The Jackal, with only two requirements: no publicity, and do not fail.

Forysth wrote the book in 35 days in 1970 (drawing heavily on his experiences as a journalist in France in the early 1960s); after several rejections, it was published the following year. It was adapted into a 1973 film directed by Fred Zinnemann, starring Edward Fox (of the Fox acting dynasty) as the Jackal and Michael Lonsdale as Lebel.

The Jackal is a far looser 1997 adaptation.

The Day of the Jackal novel provides examples of: