Video Game / Everything or Nothing 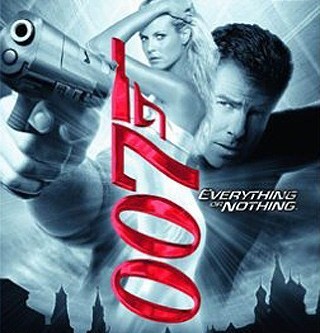 Give me everything, or nothing at all...
Katya: You'll have everything you desire.
Nikolai Diavolo: Yes, Katya. Everything...or nothing.
Advertisement:

The One With… James Bond returning to a third person shooter.

James Bond 007: Everything or Nothing is a Third-Person Shooter released in late 2003 for Game Boy Advance and early 2004 for consoles. Bond is played by none other than Pierce Brosnan, marking his 5th and final appearance in the role in any medium (as well as being the only game with him actually playing Bond, rather than the character being voiced by a soundalike).

The plot of the game follows Dirty Communists Nikolai Diavolo (Willem Dafoe) and his associates plotting to take over Russia using metal-eating nanotechnology developed by Dr. Katya Nadanova. James Bond travels all over the world in typical fashion to stop his various plots before confronting the madman in his home base. Surprisingly, the final product is better than it sounds. You could be forgiven for thinking you were playing a faithful reproduction of an actual 007 film (complete with a Batman Cold Open mission leading into the opening credits to the sound of the "movie"'s theme song

) instead of a video game with its own independent plot.

Everything or Nothing was the result of EA attempting to move the Bond licensed games out of the First-Person Shooter genre and hopefully out of the vast shadow of Rare's legendary GoldenEye. The move proved to be well-received among gamers and critics, despite the game's flaws, due in part to the huge effort put into the game and something fresh for players having grown tired of a series of mediocre (with one exception) shooters.

Preceded by NightFire and followed by GoldenEye: Rogue Agent.

Everything or Nothing provides examples of the following tropes: