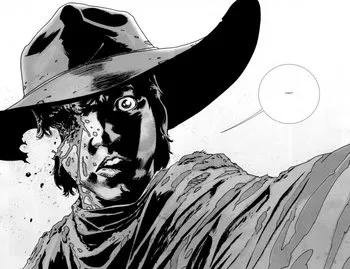 The world is too painful to look at.
Ralphie: No, I want an official Red Ryder carbine-action 200-shot range model air rifle!
Santa: You'll shoot your eye out, kid.
— A Christmas Story
Advertisement:

A character is shot in the eye. Inevitably leads to death or an Eyepatch of Power. Also works with arrows or knives. In cases that don't kill or permanently disable the victim, Magic Bullets are frequently used to prevent the slug from going through that soft, squishy little eyeball and directly into the brain behind it.

See also Eye Scream, I Just Shot Marvin in the Face, Pretty Little Headshots, Go for the Eye. Scope Snipe is when a sniper fires a shot through an opposing sniper's telescopic sight. No relation to Moe.

Some instances of this qualify as a Death Trope, so beware of unmarked spoilers!

His eye bleeds for a reason.

Alternative Title(s): Shoot Your Eye Out

His eye bleeds for a reason.