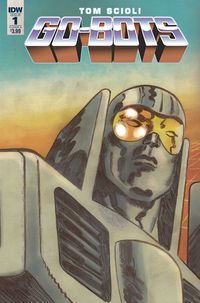 Not your daddy's GoBots.
GoBots was a five-issue miniseries published by IDW Publishing in 2018 and written and illustrated by Tom Scioli of American Barbarian and Transformers vs. G.I. Joe fame. The comic book is a reimagining of Tonka's GoBots franchise that uses some characters from the Hanna-Barbera cartoon, but differs drastically from the established canon.
Advertisement:

In this series, GoBots are reinterpreted as sentient robots built by humans to be their servants, with Cy-Kill leading an uprising towards humanity and opposition to his faction led by Leader-1.