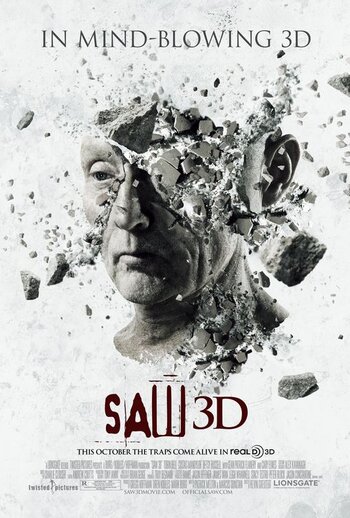 "You have amassed wealth, fame and notoriety based upon your story of survival. Many have aided in your cause, but few know the truth: you are a liar. You and I both know you have never been in a trap, nor have you ever been tested. Today, these lies will come full circle and you will learn if you truly have what it takes to call yourself a survivor."
— Jigsaw to Bobby
Advertisement:

Saw 3D (titled Saw: The Final Chapter for its home video release) is the seventh film in the Saw horror film series, released in 2010 and directed by Kevin Greutert. While plans for a Saw VIII were pre-existing, Saw VI's decrease in box office returns led to Saw 3D becoming the planned series finale, with its plot carrying over concepts from Saw VIII.

Picking up right where VI left off, Detective Mark Hoffman has managed to survive his predecessor's final game for him. Now seeking revenge on Jill Tuck, who placed him in the trap according to John's will, he proceeds to go on the warpath to find her.

All the while, a man named Bobby Dagen, who falsely proclaimed himself as a survivor of one of Jigsaw's traps and became a local celebrity selling his story, becomes the center of his newest game, which forces him to try to save the people who participated in his scams.