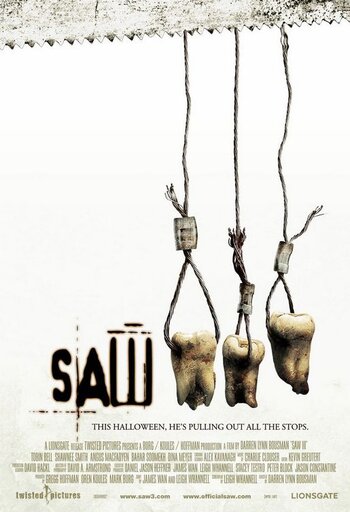 Suffering? You haven't seen anything yet...
Advertisement:

Saw III is the third film in the Saw horror film series, released on October 27, 2006 and directed by Darren Lynn Bousman. As opposed to the second film, which was based on an original independent script of Bousman's that was later revised by series co-creator Leigh Whannell, this film's screenplay was written exclusively by Whannell, based on a story treatment he co-wrote with fellow co-creator James Wan.

The police continue their investigation for the elusive Jigsaw, but find that his recent murders seem to go against his modus operandi of giving his victims a chance to live, as the recent traps have been designed to kill their victim regardless if they complete their task.

In comes the latest victim of Jigsaw's game, Jeff, a man who lost his son and has yet to move on from his death. Jigsaw offers him a chance to do so, but potentially at the expense of the people he feels were responsible for his son's passing.

As this goes on, Jigsaw himself is dying from cancer and aided by his apprentice, Amanda Young. To delay his inevitable demise, he kidnaps a doctor named Lynn Denlon to operate on him, thus placing Lynn's life on the line as well in the effort to save him.

Whannell and Wan were initially averse to the idea of a third film, but after series producer Gregg Hoffman's sudden death shortly following the release of Saw II, the two and Bousman convened and decided to make the film in honor of him. While the two creators intended for III to be the finale of the series, producers Mark Burg and Oren Koules' interest in continuing (considering the box office success the series had accumulated thus far) shot down this idea and led to the story being modified to leave loose ends to be addressed by future installments.

The Jigsaw Killer's cancer has advanced considerably over the last three movies, and has by now left him bedridden and physically dependent upon his apprentice. But even on his deathbed, he is still engaged in the process of "testing" his victims...

The Jigsaw Killer's cancer has advanced considerably over the last three movies, and has by now left him bedridden and physically dependent upon his apprentice. But even on his deathbed, he is still engaged in the process of "testing" his victims...