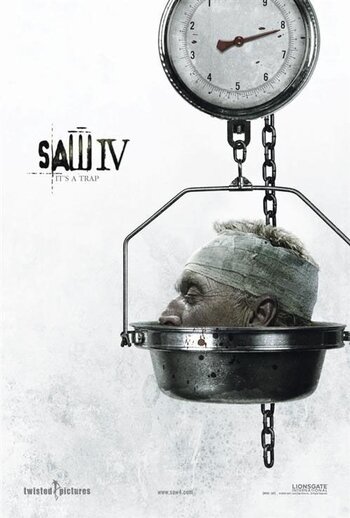 It's a trap.
"I promise... that my work will continue. You think it's over, just because I'm dead? It's not over. The games have just begun."
— Jigsaw (via tape)
Advertisement:

Saw IV is the fourth film in the Saw horror film series, released on October 26, 2007 and directed by Darren Lynn Bousman. It was the first film in the series to be written by newcomers Marcus Dunstan and Patrick Melton, based on a story co-written with Thomas Fenton, after series co-creator Leigh Whannell was reportedly disinterested in writing any more films.

Jigsaw is dead. Having been killed at the end of the previous movie, his body is soon sent to the morgue for autopsy. However, a tape is found within his stomach, and detective Mark Hoffman is called in to investigate. Playing it reveals a wider plan for Jigsaw's work that is still continuing though he is gone.

And indeed, a young cop named Daniel Rigg obsessed with rescuing Jigsaw's victims finds himself thrust into one of his games, with the lives of Eric Matthews and Hoffman on the line as he makes his way though the city to find clues to their location, finding other unfortunates along the way who are likewise in the midst of Jigsaw's deadly game.

The film also explores the legacy of John Kramer — the man behind the monster — through more glimpses of of his backstory and an additional explanation as to why he became Jigsaw.