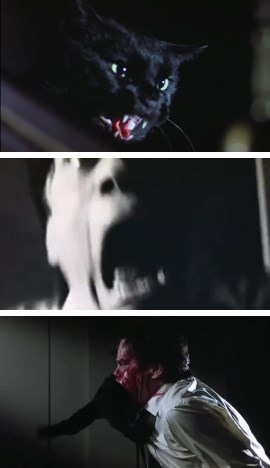 Leaping into the throat, a hitman's one weakness!
"Next time you fuck with me I'm gonna take this mop and shove it down your throat!"
—Bozo, The Toxic Avenger

An attack at someone's mouth is one of the most intense ways to hurt or kill a person.

The mouth is one of the most sensitive parts of the body. It's where we repeatedly let foreign objects enter our body — it's just that usually those objects are nourishment of some kind. Sticking in something dangerous will likely create visceral feelings of horror and revulsion in people. It has shades of Body Horror even when that trope isn't actually happening. And being situated in the head, it's also very close to the brain,note Notwithstanding cases where the being's anatomy is bizarre when it comes said organ's placement in the body, and thus presents an alternate direction for targeting the body's most vital organ.

This is why any kind of attack there, whether it's putting the barrel of a gun in someone's mouth, making someone unknowingly ingest poison, or an Orifice Invasion through the mouth, will likely be to show just how serious things have gotten.

Any part counts. It could be the interior of the mouth, the lips, the jaw, the teeth or inflicting Tongue Trauma.

This is largely a reason why the Depraved Dentist trope still happens even with modern medicine, since the thought of someone doing things in one's mouth is not pleasant for many people.

In fiction, this can be portrayed as a way for villains to get some fitting comeuppance. Perhaps going for the mouth may be the way to Attack Its Weak Point. If the attacking creature has a Breath Weapon this attack could cause a Superpower Meltdown. Eat Me can be a way to just bring the mouth to you so you can attack it. An Eat the Camera shot can be used for extra effect.

A Super-Trope to Jawbreaker (breaking or tearing the jaw), Ate His Gun (where the attack is tragically self-inflicted), Feed It a Bomb (toss an explosive into the target's mouth).

A Sister Trope to Eye Scream (another part of the face where attacks are considered brutal), Groin Attack, Breast Attack, Literal Ass-Kicking, Agony of the Feet (all serious attacks on sensitive areas).

Compare/contrast Palate Propping (the mouth is stopped from attacking you) or Kill It Through Its Stomach (using the mouth as an attack entry point).

Not to be confused with Offing the Mouth (as "mouth" here refers to a person mocking another).