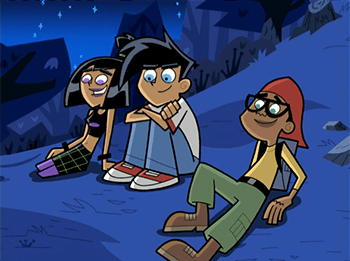 The Power Trio's answer to the Five-Token Band. It usually includes:

The end result manages to combine Token Minority and The Smurfette Principle: the Token Trio. Implicit in most cases is that the white male is the de facto head of the ¡Three Amigos!—at the least, he'll play a more prominent visual or verbal role in the commercial. Only on rare occasions will the girl be recognizably a third race, such as Asian.

This trope is common in kids' advertising. If you want to sell a product like, say, Lucky Captain Rabbit King Nuggets to kids, you put kids in the commercials. That's basic demographic appeal. But you can't cast just any kids— you want three, all implied to be friends, and for a mix of reasons— political correctness, as well as representing the largest target demographics in the Western world with a minimum of actual effort.

Even outside of advertising, this is an incredibly frequent attribute of the ¡Three Amigos!, where the white guy's status as The Hero is essentially guaranteed. Larger variety is Five-Token Band.